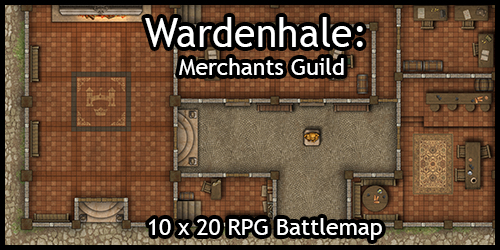 “Wardenhale, the city with a thousand names. City of Shadows. CIty of Trade, City of Justice. Wardenhale is like every city, and yet like no other”

DOWNLOAD
Wardenhale Merchants Guild is a printable dungeon floorplan compatible with any RPG/Dungeon-Crawl game. It can be used as a standalone gameboard, or combined with any same-scale tileset. As part of the Wardenhale range, it can be combined with other maps in the set to make a huge city area.

Description: A large guildhall building, with several distinct areas. On the left is a large meeting hall with a grand fireplace, and ornate tiling throughout. On the right is a courtyard with doors accessing various other areas – a Tax Hall, an area with offices and a common room for meetings and discussions.

Also included is a set of 300dpi full size jpgs, for poster printing or VTT, in both gridded and non-gridded versions. (n.b. gridless version only available as full jpeg)