Revered by many as a warrior-saint, no one knows that Grimkell began his career as a thief and bully. Evicted from the Hold for his crimes, he wandered the lands until chance placed him in between a young family and an angry dragon. In the first brave and selfless act of his life, he fought the dragon and managed to kill it, although he was mortally wounded. News of his deed reached his Hold, and whilst most residents were glad to hear of his passing, four young Dwarves were inspired, and formed the Order of Grimkell. Hundreds of years later, the Order continues, with only ever four members at any time. They work to uphold the virtues of sacrifice, generosity and defending the helpless. Grimkell would never have seen this coming…

A printable battlemap compatible with any RPG/Dungeon-Crawl game. Use as a standalone gameboard, or combine with any same-scale tileset.
Contents: A 20 x 30 map depiciting a Dwarven monastery in a wintery mountainous setting. The central courtyard area is dominated by a large statue. The two buildings that flank the courtyard contain a dorm, library and scriptorium, kitchen, mess hall and weapons room. The courtyard is open at the end, looking out over the cliffs that protect the rear of the temple.
Also included is a 300dpi full size jpg, for poster printing or VTT. (n.b. gridless version only available as jpeg) 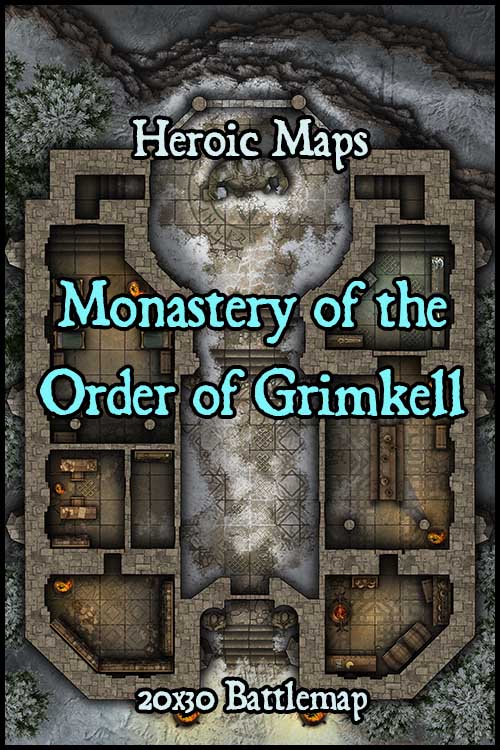