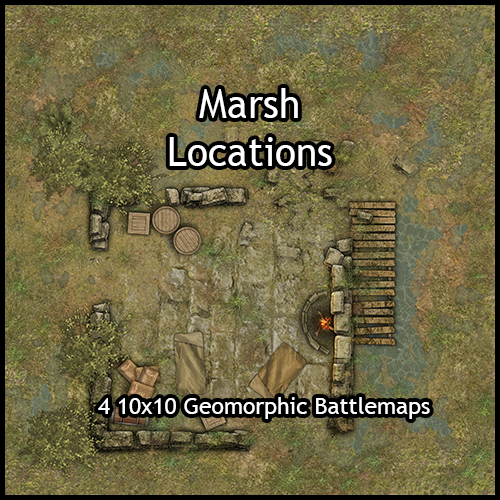 Far from civilisation, adventurers discover locations that bring adventure, treasure…or death. Marsh Locations is a set of four isolated locations that are ideal for marshland adventures.

Marsh Locations is a printable battlemap compatible with any RPG/Dungeon-Crawl game. Use as a standalone gameboard, or combine with any same-scale tileset.
Marsh Locations is a geomorphic set, comprising 5 10×10 square battlemaps which can be arranged in multiple layouts. Each tile can be used on its own, or can be matched with tiles from our Marshland geomorphic set.
Marsh Locations includes:
The Witch’s House – near a tree decorated with skulls, the House of the Witch is best avoided. Some say there is a secret pit beneath the house.
The Adventurers Camp – making camp near the ruined walls of a house, at least the camp is dry
The Altar of the Druids – Ancient standing stones, the site of countless rituals
The Ancient Battlefield – The site of a battle in years past, the skeletal remains of the fallen lay sunken in the mire. Uses:
The Witch’s House – Seek the oracle for advice, kill (or help) the witch, visit the Shaman for medicine, track down the Hermit in the Marsh
The Adventurers Camp – ambush the hidden outlaws; sheltered grove for your party of travellers to rest overnight, travelling merchant
The Altar of the Druids – attack the witch at her summoning henge; ancient dolmens; magic standing stones; perform druidic rituals; fight monsters entering through this ancient portal
The Ancient Battlefield – seek a long lost weapon, resist the call of the voices of the dead, lay old ghosts to rest. 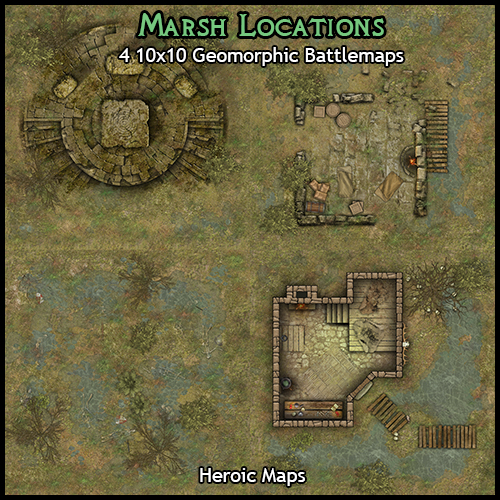 Also included is a set of 300dpi full size jpgs, for poster printing or VTT, in both gridded and non-gridded versions. (n.b. gridless version only available as full jpeg).
Download