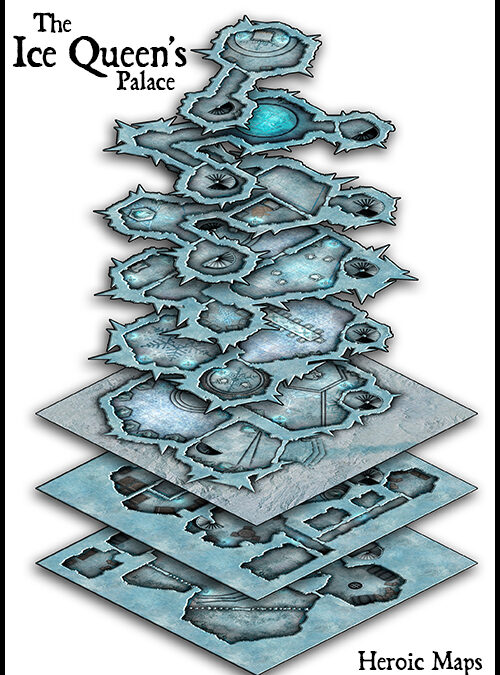 Winter has always been a season feared by people. Biting winds, freezing temperatures and thick ice make life difficult, and can also end life. People cling to their warmth during the cold seasons, huddled around their fires. This is part of what makes the Ice Queen so different. She is the winter. She is the cold. In her frozen palace, built from the living ice, she sits and plans. Beware an invitation from the Ice Queen – it may be hard to resist.

The Ice Queen’s Palace  is a set of printable dungeon floorplans compatible with any RPG/Dungeon-Crawl game. It can be used as a standalone gameboard, or combined with any same-scale tileset.
The Ice Queen’s Palace is a multiple level set, comprising 7 battlemaps (each depicting a different floor)
Sublevel 1 – Carved out of the ice, the lowest level of the Ice Palace contains prison cells, store rooms and guard rooms for the few soldiers and creatures that work for the Ice Queen.
Sublevel 2  Directly beneath the palace, this level houses some stores and prisons, but also barrack rooms for the soldiers and servants of the Ice Palace
Ground Floor– Growing from the solid frozen ground, the ground floor of the palace features an entrance hall, a hall of statues, and then a grand throne room.
First Floor – Accessed by spiral stairs, the first floor has a banquet hall, ballroom and reading room.
Second Floor – On this level is an audience room, the treasury and the resting place of a magic ice staff
Third Floor – This smaller level has two bedrooms, for those guests invited to stay a while.
Fourth Floor – This floor is where the Ice Queen casts her powerful elemental magic
Fifth Floor – The highest level of the tower is where the Ice Queen sleeps, in a grand bed
Also included is a set of 300dpi full size jpgs, for poster printing or VTT (gridded and gridless) 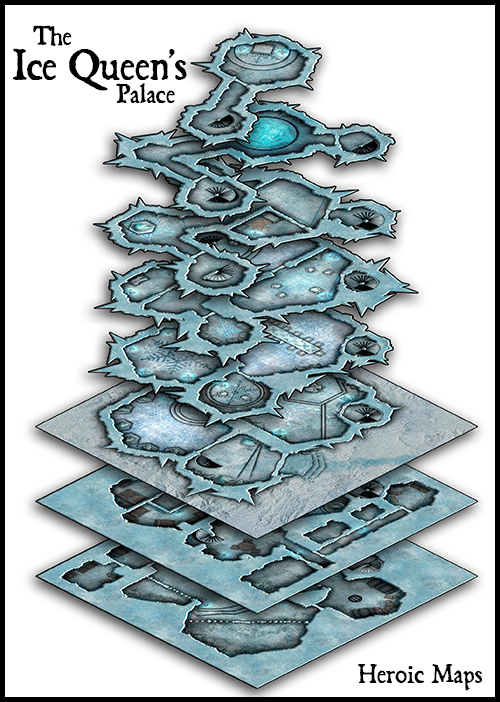