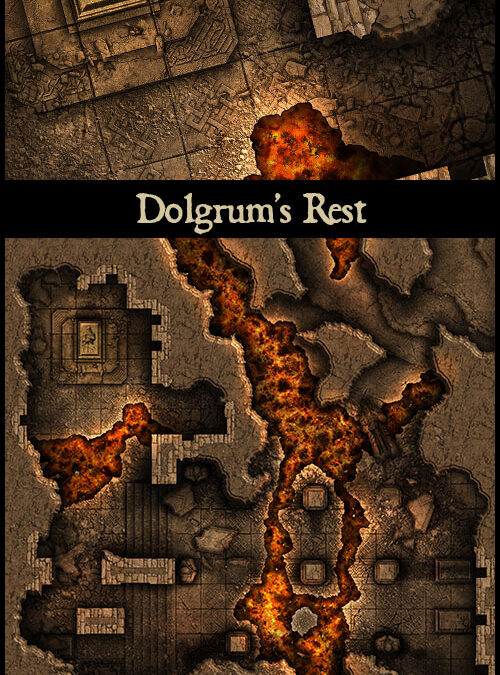 In life, Dolgrum the Builder was a well respected Dwarf. He worked on many notable projects – the raising of the WInter Hall, the carving of the Cavern of Hilfigr and more. His great ambition was to build a family tomb worthy of his own skill. He began work in his 607th year, and worked and worked. Eventually, he died before the completion of the full tomb, but was finally laid to rest. Other members of his family were alao laid to rest in the mausoleum. However, his Great Great Great Grandson, Thorgrum, decided to expand the tomb a little, and unfortunately he lacked the skill of Dolgrum. One day his excavations uncovered a pool of magma, which flooded into the tomb. Poor Thorgrum was killed immediately, and the river of magma that poured from the chamber flooded through Dolgrum’s Rest, carving through the statues and intricately carved stone.

A printable battlemap compatible with any RPG/Dungeon-Crawl game. Use as a standalone gameboard, or combine with any same-scale tileset.
Contents: A 20 x 20 battlemap depiciting a Dwarven tomb hall in a cavern setting, with a river of magma cutting through. Fallen statues, rubble and columns litter the floor, and in some cases bury the tombs. The tomb of the dwarf Dolgrum is still intact, although it is now isolated by rivers of lava cutting through the burial chamber.
Also included is a 300dpi full size jpg, for poster printing or VTT. (n.b. gridless version only available as jpeg) 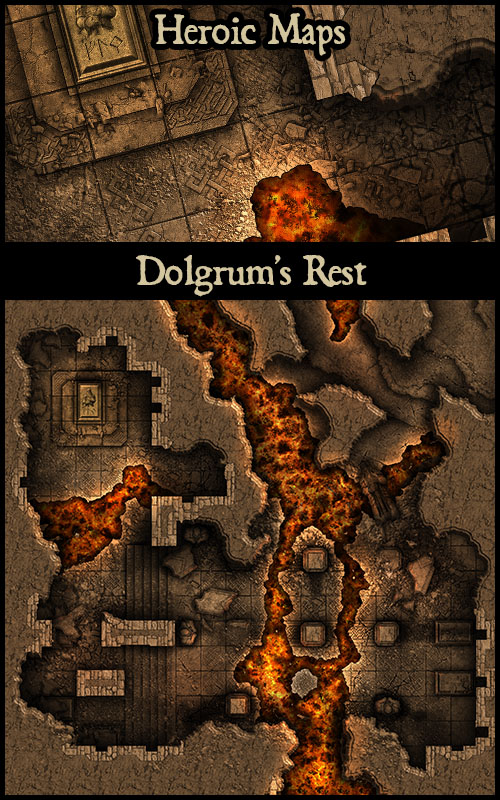